Are You Facing Adverse Administrative Action? Call Us

What Is Adverse Administrative Action?

In the Army, any commander may issue an administrative letter of reprimand. However, only a General Officer Memorandum of Reprimand (GOMOR) may be filed in your Army Military Human Resource Record (AHMRR). These are typically issued by the Commanding General (CG) to officers and senior enlisted (E-7 and above). In such cases, the CG will notify you that you are reprimanded and for what. The standard of proof is a preponderance of the evidence, and you will be given a copy of the investigation. You will then have 7 calendar days to submit a rebuttal unless an extension is granted for good cause. The CG will consider your rebuttal and decide whether to rescind and destroy the GOMOR, file it locally in your Military Personnel Record Jacket (MPRJ), or file it permanently in your AHMRR. If filed locally, it will remain in your MPRJ for 2 years or until you PCS, whichever occurs first. If filed permanently, it will have an adverse impact on promotions, and administrative separation is required to be initiated for officers. A GOMOR for a sex offense under Article 120, UCMJ, is required to be filed permanently in a Soldier’s AHMRR regardless of rank.

In the Air Force, any member of the administrative or operational chain of command may issue a Record of Individual Counseling (RIC), Letter of Admonishment (LOA), Letter of Concern (LOC), or Letter of Reprimand (LOR) if the preponderance of the evidence indicates an offense has been committed or an issue needs to be corrected. If you receive one of these, you may submit a response which becomes part of the record. Out of all of the actions listed here, the LOR is the most serious.

For officers, the record of the LOR is required to be filed in your Unfavorable Information File (UIF). Any Letters of Concern (LOC) or Letters of Admonition (LOA) not filed in the UIF, must be filed in your Personnel Information File (PIF). Although these filings are required, an effective response may convince the command not to pursue further action, such as administrative separation.

For enlisted, the issuing authority may send the finalized record to your commander or superiors for information, action, or for their approval to file in your UIF or PIF. The appropriate authority may rescind RICs, LOCs, LOAs or LORs in an enlisted or officer UIF if new evidence shows, by a preponderance of the evidence, that: 1) you did not commit the act; 2) if the action was issued in a way that violated your due process rights; or 3) if the appropriate authority determines more or less severe action is warranted.

In the Navy, “letters of reprimand” may only be issued at NJP. However, Sailors are entitled to submit a statement in rebuttal to an adverse Page 13  that is filed permanently. Additionally, Sailors may be issued a Nonpunitive Letter of Censure (NPLOC) or Letter of Instruction (LOI) to address deficiencies in performance. While NPLOCs are private in nature, LOIs are typically issued to officers and petty officers to document rehabilitation efforts. Although there is no absolute right to respond to an LOI, it is considered best practice to give Sailors the opportunity since it can be used to support other adverse action. LOIs often precede a Detachment for Cause (DFC), which Sailors do have the right to respond to. In turn, DFCs may lead to a Board of Inquiry or Administrative Separation Board.

In the Marine Corps, “letters of reprimand” may only be issued at NJP, just like the Navy. However, Marines are entitled to submit a statement in rebuttal to adverse information in their file, such as a Page 11 or an adverse counseling, commonly referred to as a “6105.”  Such adverse information commonly precedes administrative separation.

There are many reasons why the military might separate a service member prior to the end of their service obligation. The most common reason is for misconduct that the command has determined does not warrant trial by court martial. The service member will be notified of the misconduct that is the basis for the separation and the characterization of service that is being contemplated (honorable, general under honorable conditions, or other than honorable (OTH)). Although an administrative separation is not a criminal conviction, and cannot result in a criminal record, an OTH or general discharge carries a stigma and can significantly affect your civilian employment opportunities after your separation. Depending on your circumstance, you may be entitled to have a board hear your case.

In all separation boards, there will be a “Recorder” who is typically a Trial Counsel (military prosecutor) and will present the evidence against you. It will be up to your attorney to present a defense on your behalf. The board will take place in a conference room and is like an informal trial. There are no rules of evidence like at a court martial. The board can consider anything that is deemed relevant, although there are some limitations. The Government’s standard of proof is a preponderance of the evidence, or “more likely than not” that you committed the alleged offense(s). After the presentation of evidence and arguments from both attorneys, the board will deliberate and make a recommendation whether to retain you in the service. If they recommend your separation, they will also recommend the characterization of service you should receive. You cannot receive a characterization of service less favorable than what you were notified of (e.g., if your notification memorandum indicates the least favorable characterization you may receive is a General Discharge, you cannot receive an OTH).

If your notification memorandum indicates that an OTH is contemplated in your case, you are entitled to a separation board. If an OTH is not contemplated, you will only be entitled to a board if you have the requisite number of years of combined active duty and active reserve time. The eligibility, board composition requirements, and process, are different for officers and enlisted personnel. 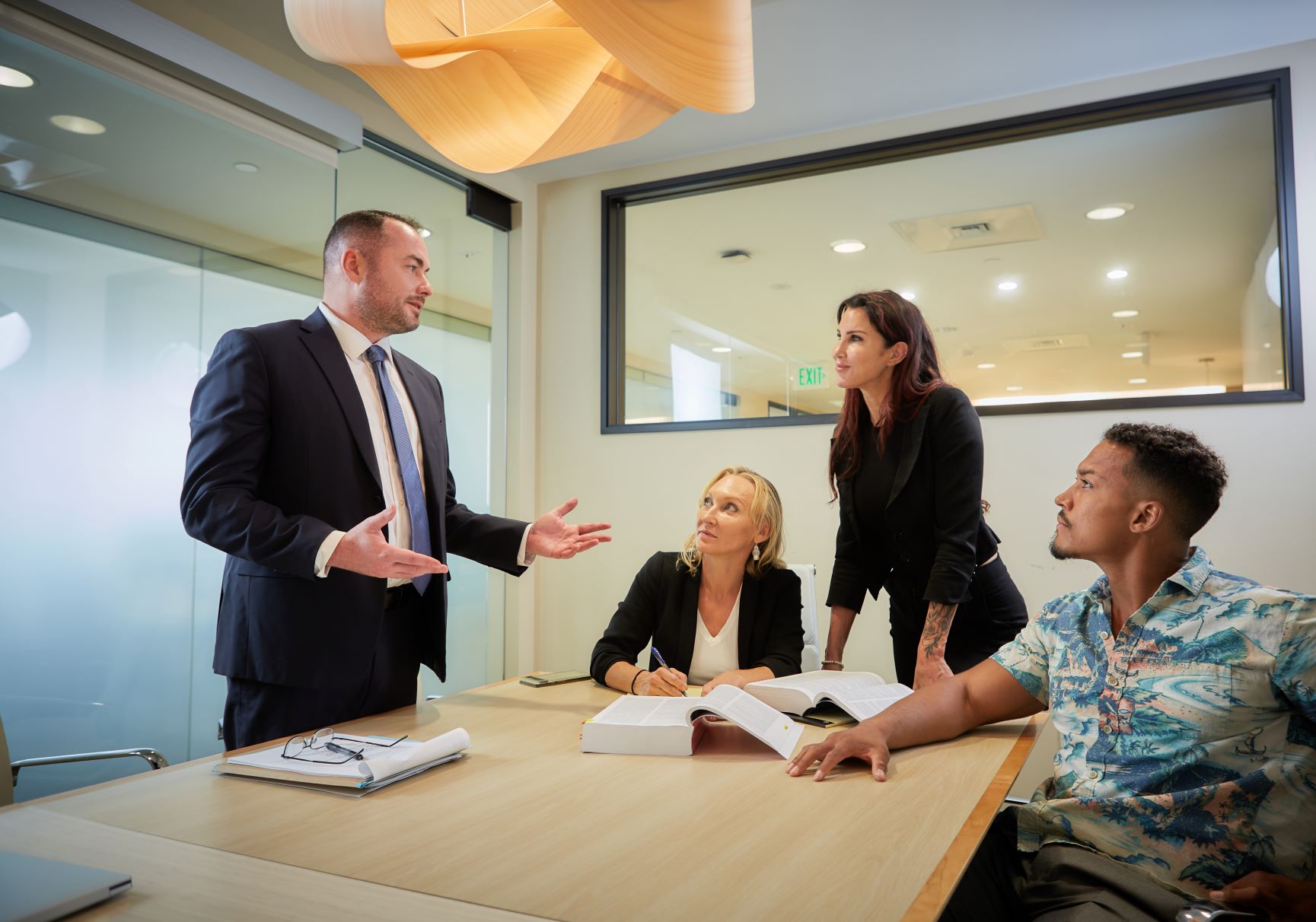 For enlisted personnel, a board is typically referred to as an administrative separation board, or “ADSEP board.” For members in a DoD branch, you need to have at least 6 years of total active service if you were not notified that an OTH is being contemplated. The board will be comprised of at least three members. At least one board member must be an O-4 or higher, and the majority must be commissioned or warrant officers. If an enlisted member is appointed, s/he must be an E-7 or above, and senior to you. If the board recommends retention, the separation authority may approve the recommendation or forward the matter to the Secretary concerned with a recommendation for separation based upon the circumstances of the case (this is extremely rare). If the Secretary approves separation, the characterization of service will be Honorable or General. If the board recommends separation, the Separation Authority may approve the recommendation, approve but suspend execution, or approve a more favorable characterization of service than what was recommended. The Coast Guard, which falls under the Department of Homeland Security (DHS), requires 8 years of active service for enlisted personnel to be board eligible. The board will be comprised of a Lieutenant Commander or above, another officer (which may be a warrant officer), and an E-8 or above, which has to be of the same rank or senior to you. Final action on all boards is taken by Commander, Coast Guard Personnel Service Center (CG PSC). A board’s report, including its findings of fact, opinions, and recommendations, is advisory only. It will be thoroughly and carefully reviewed and considered, but it is not binding on CG PSC.

For officers, separation boards are typically referred to as a “Show Cause Board” or by the correct title, “Board of Inquiry.” For active duty officers in a DoD branch, you need at least 6 years of total active commissioned service to be eligible if the notification memorandum did not include the possibility of an OTH. Active duty warrant officers need 3 years of service since the original appointment as a warrant officer in the current component. The board will be comprised of members senior in rank to you, and one member must be in a grade above O-5. If the Board of Inquiry determines that you should be retained, the initiating Show Cause Authority (SCA) will close the case.

If the Board of Inquiry determines you should not be retained, your attorney may submit matters to the SCA identifying deficiencies with the board. In the Army and Air Force, the SCA then forwards the case to a separate board to review all Board of Inquiry records (Army Board of Review/Air Force Personnel Board). This board will make recommendations to the Secretary concerned as to whether you should be retained.  In the Navy and Marine Corps, the SCA will forward your case to the Secretary of the Navy for final determination.

Separation by Notification (No Board)

If you are not facing an OTH and you do not have enough active service to entitle you to a board, the command can separate you for misconduct via the notification process. You will receive a notification memorandum indicating the offense and the least favorable characterization of service you can receive. In this situation, it is typically a General Discharge. You will be given the opportunity to submit a written rebuttal to the separation authority within a certain period of time. You will not be able to appear at any type of hearing. Your response is strictly limited to written matters. This process is fairly standard with all branches of the military, for both officers and enlisted.

A military aviator may be subjected to a board to determine whether they should lose their aviation qualification. In the Air Force and Army, this is referred to as a Flying Evaluation Board (FEB). In the Navy, this is referred to as a Field Naval Aviator Evaluation Board (FNAEB). Reasons for an FEB/FNAEB include misconduct, loss of confidence, or failure to maintain qualifications. The process is very similar to a Board of Inquiry.

I failed a urinalysis and my commander notified me that he intends to separate me. Can he do this even though I’ve never been in trouble?

Yes. Initiation of separation for any drug use is mandatory for all branches of the military. However, the separation authority (or board) may still decide to retain you if your attorney presents a convincing defense.

Can the command stack the board with members who will vote me out no matter what?

No. A good defense attorney will make sure that the selected board members are unbiased. Biased members will be replaced.

If the board recommends my separation, is there anything else that can be done?

Your attorney can write a letter to the separation authority (enlisted) or show cause authority (officer) highlighting any legal deficiencies in the board proceedings. This may impact the final decision.

If you or someone you love is facing adverse administrative action, contact us immediately.

Even if the investigation is ongoing and you have not yet been formally charged, we can help protect your rights, and take proactive steps to mitigate your exposure to life-changing criminal penalties.